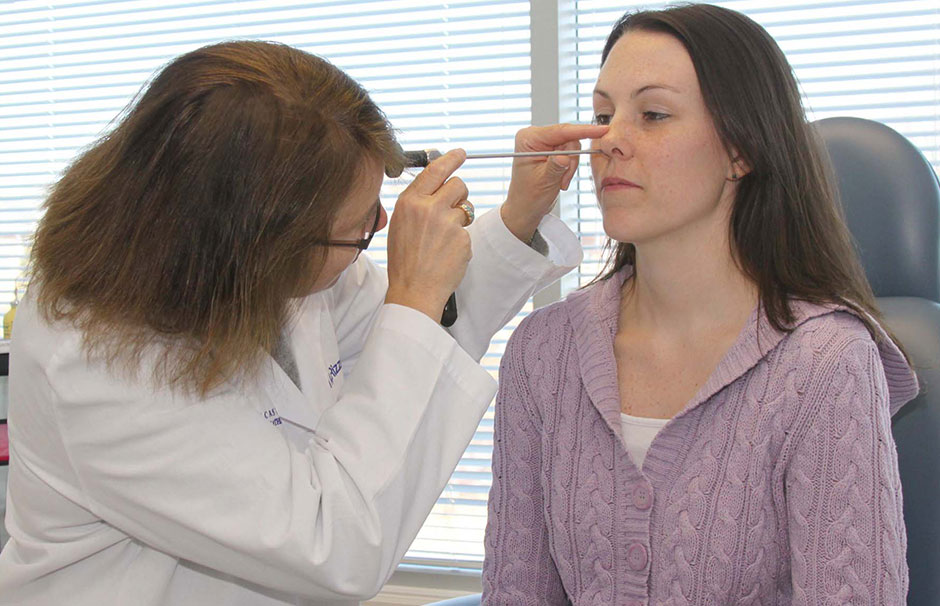 Inflammation of the nasal mucous membrane is called rhinitis. The symptoms include sneezing and runny and/or itchy nose. There are two types of rhinitis: Allergic and non-allergic. Non-allergic rhinitis can be caused by pollutants, strong odors or a cold but can also be the result of a deviated septum and over use of decongestants.

Sinusitis is inflammation of the lining membrane of any sinus. Sinusitis is often preceded by rhinitis and rarely occurs without concurrent rhinitis. The symptoms, nasal obstruction/discharge and loss of smell, occur in both disorders. Computed Tomography (CT scan) findings have been established that the mucosal linings of the nose and sinuses are simultaneously involved in the common cold.

The catalyst relating the two disorders is thought to involve nasal sinus overflow obstruction, followed by bacterial colonization and infection leading to acute, recurrent or chronic sinusitis. Likewise, chronic inflammation due to allergies can lead to obstruction and subsequent sinusitis.

Using an endoscope under topical decongestants in the office, visualization of the nose and its structures is done to further evaluate for infections, polyps and anatomic deviations. CT scanning and allergy testing can help determine the causes and extent of many problems. Antibiotics, antihistamines, decongestants and steroid nasal sprays are all medical options used to treat congestion and infections.

The shape of your nasal cavity could be the cause of chronic sinusitis. The nasal septum is the wall dividing the nasal cavity into halves; it is composed of a central supporting skeleton covered on each side by mucous membrane. 80% of all nasal septums are off-center. A “deviated septum” occurs when the septum is severely shifted away from the mid-line. The most common symptom from a badly deviated septum is difficulty breathing through the nose. In some cases, the crooked septum can interfere with the drainage of the sinuses, resulting in repeated sinus infections.

A deviated septum may cause one or more of the following:

Septoplasty is the preferred surgical treatment to correct a deviated septum.

We are ready when you are.

Let’s talk and schedule your next appointment.

We are here to serve you. To schedule an appointment, just call today.